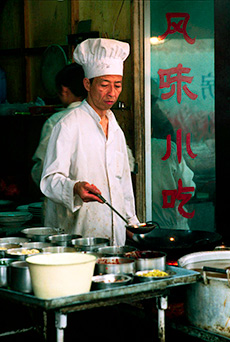 The taoist physician and alchemist Sun Simiao was the first man to write a monograph on Chinese Dietetics (ca. 652 BC). The work, spanning 30 times, is called “invaluably precious recipes,” which is in line with Sun Simiao’s saying:

"Human life has a high value, it is worth more than its weight in gold."

The saying reflects the important status of nutrition in Chinese society in general and in TCM in particular. The conviction that foods are to be put on the same level as remedies can be found in this culture until this day. The balance between YIN and YANG, of cooling and warming foods, as well as the seasonal adjustment of the foods to individual bodily conditions and requirements are seen as the key to a healthy body and a healthy soul.

The concept of 5 phases (wu = 5, xing = phase) as a component of traditional philosophy forms the basis for the classification of foods into specific groups by apparatus, flavour and mode of effectiveness. This concept rests on the observation of nature and its five phases. The elements of wood, fire, earth, metal and water are in constant rhythmic change similar to that of the seasons or the maturing human (from child to old man). The characteristics of each single element are eclectic.

If you don’t have any specific ailments but nevertheless want to formulate a diet based on Chinese Dietetics I can give you the following pointers:

The body obtains Qi from foods. Qi guarantees the functionality of your organs and all vital bodily functions. Thus, from a Chinese point of view, going on a diet is a threat to your Qi and can lead to Qi deficiency!

The first symptoms of Qi deficiency are:

A small change in eating habits can often make a significant contribution to improved well-being. Nutrition can not be used in acute cases but has a positive medium- to long-term effect on well-being and health. It is, however, often hard to find the correct classification of foods to the elements and flavours by yourself, especially if you already have certain ailments. In such cases it is useful to consult a TCM expert in order to jointly develop “nutrition strategies”.

What is important to me:

Sensible nutrition has nothing to do with counting calories as it will not lead to weight gain in the first place! Healthy food does not have to be tasteless or boring and does not mean spending hours in the kitchen!

The sensual character of food should not be forfeited!