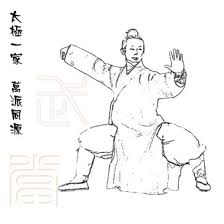 In its broadest sense, Taiji Quan is a subset of the physical exercises of Qigong. Traditionally, however, Taiji is primarily a combative expression. It was initially developed as an esoteric familial form of exercise in the 17th century from martial arts that were practiced at the time. Around 300 years later, during the Chinese cultural revolution, Taiji reached the mainstream in its simplified and shortened Beijing form.

The defining element of Taiji is the interaction of the two polar powers: Yin and Yang. The harmonic interchange of inhaling – exhaling, tension – relaxation, forwards – backwards, high – low mirrors the constant changes that nature undergoes. The Chinese word “TAI” originally stood for the uppermost beam in a house. Its modern translation is: the highest thing, the outermost thing. “JI” stands for absoluteness, “Quan” stands for the fist. Taiji practitioners learn a precisely predefined sequence of movements (the Beijing form consists of 24 movements, other forms, some including weapons, are longer). They concentrate on the interaction of arms, legs, torso, head, eyes. Thus, Taiji stimulates retentiveness and memory as well as the practitioner’s general spiritual level allowing him/her to “let go”, to forget his/her everyday problems. This aspect of Taiji – the harmony of body and soul – can be seen as an expression of the indivisible wholeness of man.

There is one overarching prerequisite that needs to be fulfilled, whichever form of “working with Qi” one decides to pursue. Practitioners of Taiji must relinquish the acquired thought patterns related to “striving for perfection”. The aim is neither to learn a movement pattern as quickly as possible in order to move on to the next one immediately, nor to consume as many types of Taiji as possible. The real aim is to recognise and perceive oneself, keeping in mind the old and very valid Chinese proverb: the journey is its own reward. Those that have put themselves on the journey of training patiently with enthusiasm and curiosity have, with the help of regular practice, started to perceive their undivided self again have already reached their goal.