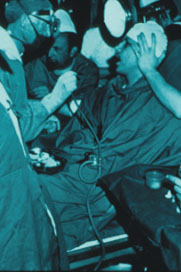 Due to the positive results of related research, particularly in the area of pain therapy, acupuncture has been officially recognised by the Austrian high council of health since 1986. As in all forms of therapy in Chinese medicine the philosophical concepts of YIN and YANG (ca. 1000 – 700 BC) and “Wu Xing – the theory of 5 elements” (ca. 400 – 200 BC) form the basis for diagnosis and treatment using acupuncture. All methods are designed to achieve the single goal of protecting the harmonic flow of Qi and to thus protect the body from serious illnesses.

Qi is often translated as vital energy, vigour, matter in the psychological and physiological sense and many other terms. The meaning of the word can only be gleaned from the particular context that it is used in.
Modern physics would probably find the explanation of Qi as the dichotomy of energy and matter (e= m.c2) most appealing. It is important to understand that disruptions to the harmonic flow of Qi inadvertently lead to disruptions in wellbeing and, in the long-term, the emergence of illnesses. For example, physical pain and psychological problems result from stagnation of Qi; fatigue and exhaustion result from a lack of Qi.

Meridians are invisible lines that span the body. They can be felt when the prick of an acupuncture needle leads to a feeling of heaviness or a pulling sensation. In Chinese these sensations are referred to as “deqi” or the arrival of Qi.

The Meridians form a network that connects acupuncture points that lie on the surface of the body, all inner organs with one another as well as with the points on the surface. They are like optical fibers that convey Qi, energy, instead of light. Therapists can use the connections between the inner body and the surface on the meridians both to diagnose and treat patients. For example: shoulder pains that spread along the colonic meridian can be caused through problems with the shoulder muscles as well as problems with the colon.

In developing the above example the following question arises: how can a therapist tell where the pain is coming from? The answer is through a similar procedure as in orthodox medicine – a detailed anamnesis that is complemented with tongue and pulse diagnostics.

The tongue offers a range of clues about the energy distribution in the body. For example it reveals whether there is excess heat/cold or a surplus/lack of energy. The body of the tongue, its colour, any coating and tongue veins are carefully inspected.

Pulse diagnostics are regarded as a high art in the realm of TCM. In ancient China it was not common to speak to, touch or even lay eyes on high-ranking personalities. Physicians were separated from their patients by a curtain leaving the pulse as the only indicator that they could use to formulate a diagnosis. This technique required vast experience and expertise. Nowadays we have access to modern diagnostic methods but the state of a patient’s pulse is still a valuable source of clues that help to find the most suitable therapeutic approach.

The insertion of a needle or pointing a light from a low level laser at an acupunctural point offsets the imbalance between the powers of YIN and YANG and moves the Qi. If the source of disruption is cold (as for example in the case of a cold) then heat therapy, using Moxa, is used in addition to conventional acupuncture. Moxa is a special herb that carries heat into the body via the acupuncture needle.

Acupuncture reduces the time that the body requires to regulate itself thus helping it to return to a balanced state. Acupuncture, therefore, is a REGULATION THERAPY, that largely depends on the individual reactivity of each patient’s body and can definitely not effect something that the body is not capable of doing.

The timing of the beginning of the therapy is crucial for the success of the latter. It is not possible for the body to ‘regulate’ an illness that has been plaguing it for several years in a matter of weeks. It is reasonable to expect a lengthy therapy when trying to cure chronic illnesses.

Acupuncture needles are very thin and experienced therapists insert them without inflicting pain on the patient. Children are usually treated by pointing laser beams at points or by sticking small seeds on points (a form of acupressure). A special massage can be used either as a complement to or instead of needles to activate the Qi in the meridians. Patients often describe the effects of therapy as pleasantly relieving and energetically invigorating. Acupuncture can not cure everyone, but usually has positive effects on all patients’ health. Combining it with other treatment methods (orthodox medicine, homeopathy etc.) can be useful.

The WHO (World Health Organisation) recommends acupuncture in the following cases:

here you find studies for this topic