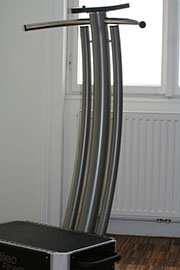 … back pains are widespread in Vienna (as well as the rest of Austria. 20.7% of both men and women complained of back pains in 1999. Every 11th man and every 9th woman in the range between 15 and 29 years of age suffers from back pains.” Urbas, E.; Klimont, J. “Chronic Diseases in Vienna". Source: City of Vienna, 2004.

Concerted WBV training is an effective way to treat exactly this, and it has the added benefit of serving as a preventive therapy for osteoporosis.
The rocking and sideways movements of the instrument emulate natural walking movements and the instrument thus trains muscular functions as well as coordination of the muscles.

Particularly suitable for elderly people, the WBV is an important preventive measure against falls and resulting improvements in the supporting function warrant effective protection against bone fractures. WBV also exercises the cardiovascular system and thus has the additional advantages of lowering blood pressure and stimulating metabolism.

The vibrations happen at a low frequency which is not dangerous for the body and thus do not have any unwanted side effects.